"It looks absolutely super in my cottage" Mirander, Sussex

Bodiam Castle is late medieval moated castle, a Scheduled Monument and Grade I Listed. It is situated near the village of Robertsbridge, in East Sussex, about 28 miles and an hour away from our oak reproduction furniture showroom. 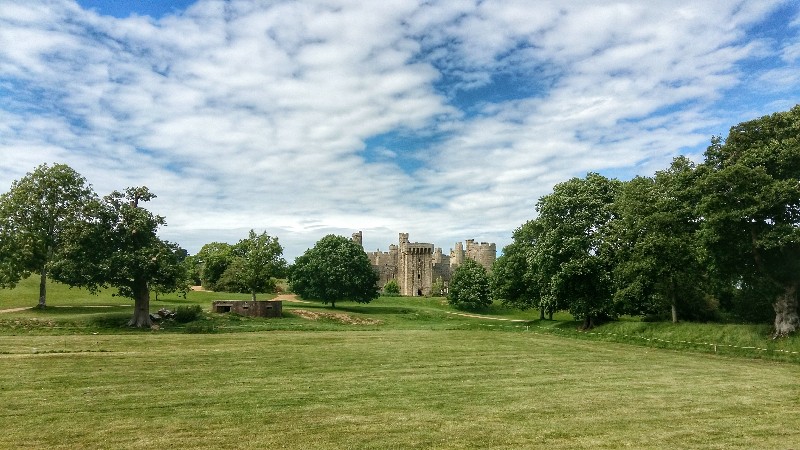 Built by Sir Edward Dalyngrigge in 1385, it was always intended to be both a comfortable home as well as a defensive fortress against the threat of a French invasion. The adjacent River Rother was navigable by ships at the time, right up to the site of Bodiam, and the English Channel was a being contested for overall control. With this threat in mind, Dalyngrigge was granted a licence to ‘crenelate’ his existing building, but chose instead to build a new fortified manor house nearby.

The architectural uniformity suggests that construction was carried out in one phase and it is understood, at an unusually rapid pace. This sense of urgency was somewhat unsurprising, given the impending danger, following the ending of a two year truce between England and France, some fifty years into what eventually turned out to become ‘The Hundred Years War’. There are no records as to exactly when the castle was completed, but it is thought to be around 1392. Unfortunately, Dalyngrigge didn’t have long to enjoy his new residence. He died in 1395, passing the estates on to his son, John, who also had the relatively short pleasure of ownership until his death, just 13 years later, in 1408. 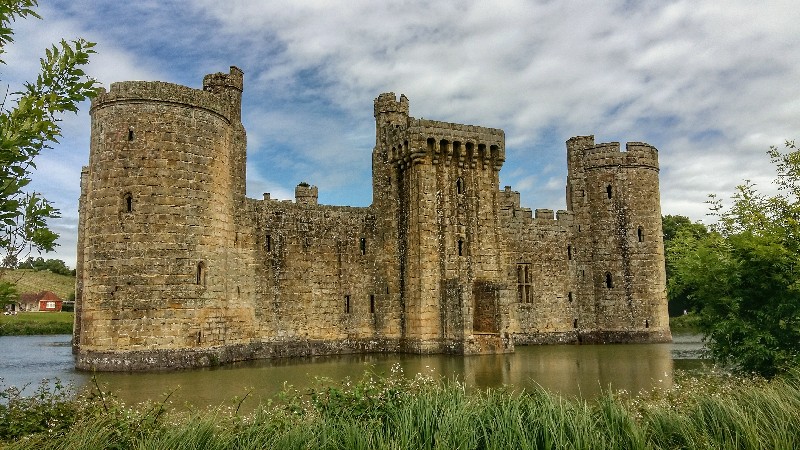 The south side of Bodiam is the first close glimpse the visitor gets after leaving the National Trust car park and ticket office. It shows the now redundant Postern Gate, originally used as a tradesman’s entrance in the late 14th century. It had a drawbridge close to the moat bank, which was designed for more pedestrian use, as it was too narrow for horse drawn carts and the gate was too low for a horse and rider. High above the entrance were murder holes, gaps purposely left in the protruding stonework through which objects such as rocks, arrows, scalding water, hot sand, quicklime and tar could be thrown down onto the heads of intruders. Contrary to popular belief, boiling oil would have been rarely used, due to the cost. As it turned out, none of this ever happened at Bodiam, since the castle never needed to be defended.

It is built of local Weald sandstone (which is actually quite a fragile rock) and consists of a rectangular plan, with four round towers, one in each corner, and square towers in the centre of each of the four sides.

The north west round tower of Bodiam, which served as the castle prison. Behind the tower were possibly service rooms. To the right is the square west tower, with the section in between possibly housing the Ante (waiting) room. To the left between the round tower and main gate, again possibly, were the stables. There is a large well inside the tower to the far right (the left hand tower in the previous photo). The word possibly is mentioned several times, as the exact function of these chambers are sketchy.

The castle is completely surrounded by a moat, which is spring fed from both the north and south. Across the moat were originally two means of entrance. The southern side, known as the Postern Gate (see above), no longer has any bridge connecting it to the banks of the moat. The bridge from the northern main gatehouse (where today’s visitors enter) originally emerged from the castle, before turning through a right angle, to the western bank of the moat, rather than straight across as it is now. The ‘dog leg’ made it easier to pick off unwanted intruders by bow and arrow, from the north west round tower and battlements.

However, whilst the castle was indeed defensive enough to provide a degree of deterrent against unwanted intruders, various features deemed it not particularly robust enough to have withstood a determined onslaught by a serious army. The moat, for example, could be drained very quickly by opening up any one of the restraining banks. Relatively large windows on the exterior walls would also be considered a weak point by an enemy of nationalistic proportions, as were the rather thin walls, by usual castle standards. There appears therefore, to have been an element of architecture and siting, for the purposes of display and prestige, rather than out and out self-protection. 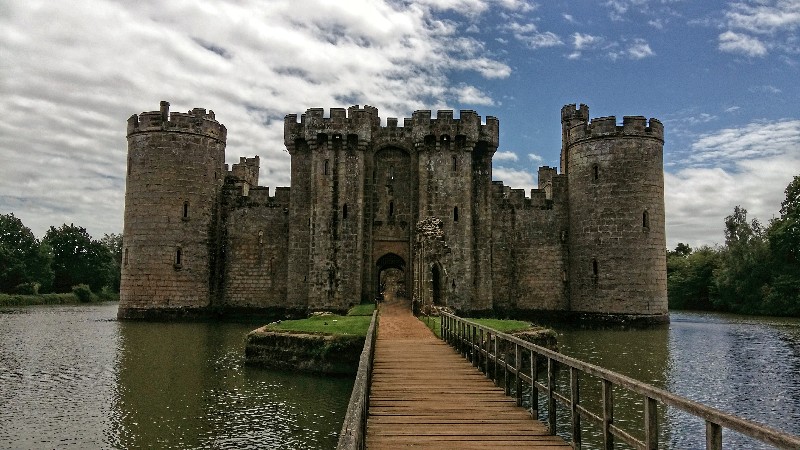 The main gate, where visitors now enter, used to turn towards the right of the photo from the right side of the octagonal remains of the outer causeway (the bit with the grass on now).

Its demise as a habitable home came about immediately following the English Civil War, when its then owner, John Tufton, a Royalist, was forced to sell Bodiam to pay a hefty fine imposed by the victorious Parliamentarians. It was a Parliamentarian, Nathaniel Powell who subsequently purchased the castle and lands, from which its partial destruction came about, as was the general policy across much of the country, to prevent fortified houses from being reused. 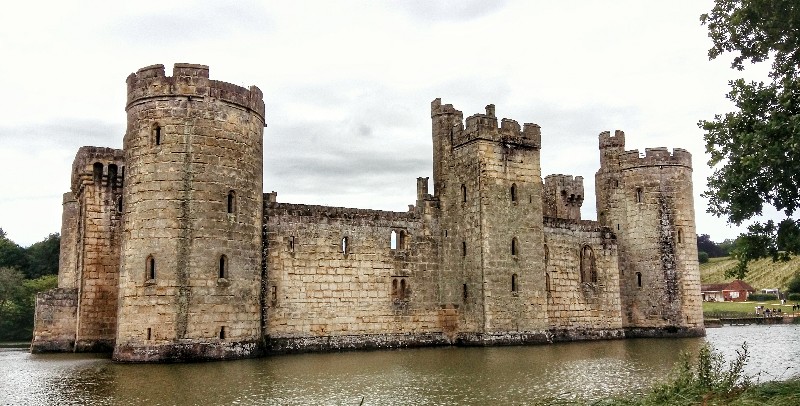 Since the 17th century, the castle fell into decay, with various owners after the early 1800’s attempting some repairs and ‘improvements’. Not all so called 'good intentions' did the castle any favours. For example, rampant ivy, although fashionable on ruins in the 19th century, had a detrimental effect on the masonry.

The last private owner, Lord Curzon, undertook the most ambitious restoration work, before handing the castle and grounds over to the National Trust in 1926, for the benefit of the nation. The Trust continued the repairs, restoration and conservation, which is still going on today. It is open to the public most days of the year and the Terrace Room can be hired for wedding receptions, birthday parties and corporate entertaining. 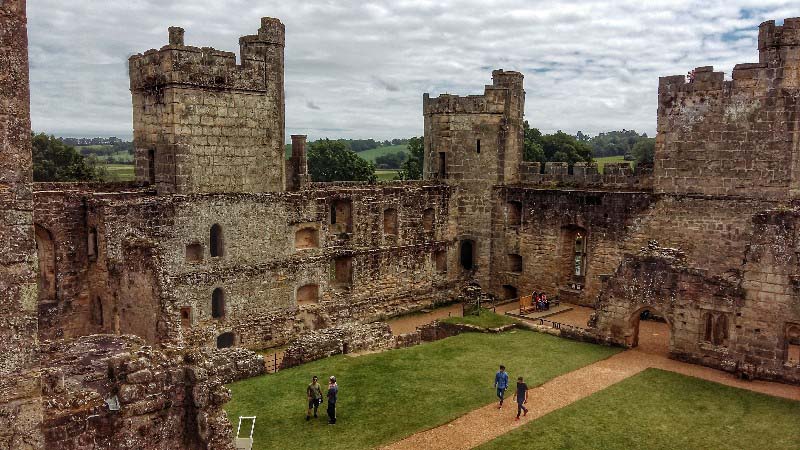 Interior view of Bodiam, looking towards the south eastern corner tower. Just to its right, is the site of the great hall (where the people are seated on the raised dais) and to the right of that, through the wide lancet headed archway, is the corridor to the now disused Postern Gate. This whole area was given over to the lord's private chamber and sleeping quarters, the chapel, and the lady's sleeping quarters. The people help to give a sense of perspective. 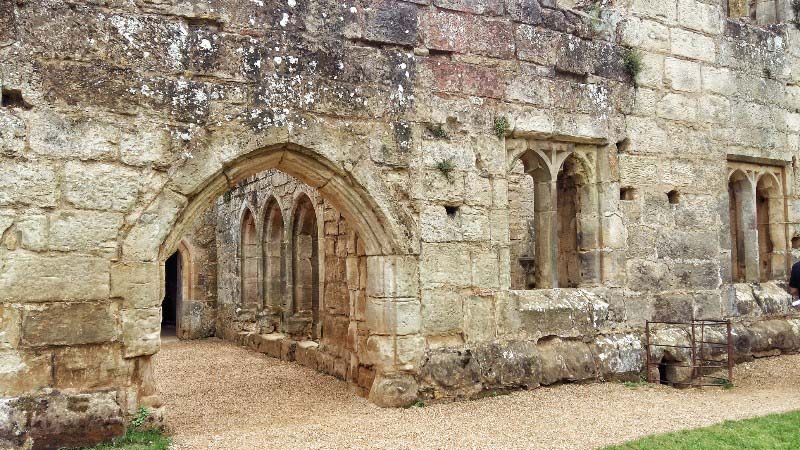 A closer view of the wide lancet headed doorway, with the short corridor that leads to the southerly Postern Gate entrance (now disused). This, and the gothic stone windows, denote the inner courtyard wall. The three close-set narrow arches within the corridor, were the access doorways to the kitchens.

Do call back, as we intend to include more photos and descriptions of the interior at a later date.

To find on Google Maps, click Bodiam Castle  (opens in a new window/tab) 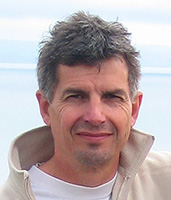 From a small boy at infant school, I've had a passion for early furniture and architecture, embracing the 15th, 16th, 17th and 18th centuries. I’ve spent almost three decades designing and making replica early oak furniture (and architectural woodwork)...with my own hands!

All above links open in a new window/tab